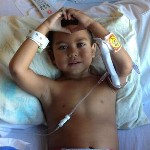 Team Jazz fighting for a cure Welcome to my CURE for IBD personal fundraising page!

Many of you know our story personally and some of you have only read about it but for those of you who havent I would like to share why we fight so hard.

My son, Jazz Little, was diagnosed at the age of 3 with severe Crohn's disease. He is now 9 years old and it has been a long and scary battle. He spent most of the the first three years after diagnosis in the hospital. We were told that they didn't think that he was going to make it at one point. But "they" don't know my son like I do.. He is a fighter, he is determined, and he has a mission. He told us at the age of three, while he was dying in a hospital bed, "don't worry about me Momma, God meant for me to have Crohn's because there as so many people that I have to help I will be okay". So from that day forward we decided that we were no longer victims of this disease, we were warriors, fighters, and advocates. WE WILL FIGHT UNTIL WE FIND A CURE and we could use your help!  Jazz and I have joined up with CURE for IBD because they share our same passion and drive to find a cure. Allowing ALL of the monies that we raise to go directly to Seattle Children's IBD research program. When this fundraiser is over we will literally write a check directly to them with every penny we have raised.

CURE for IBD was founded on the belief that if more funds are allocated to research, new treatments and cures will be found sooner.  For many people, this can't happen quickly enough.

I am very proud to say that 100% of all donations I receive will be allocated directly to IBD research.  CURE for IBD will not use any of these funds for overhead, administrative, or event expenses.

I can't thank you enough for your support.  Your generosity brings hope for so many people who suffer from these diseases.

The mission of CURE for IBD is to fund research towards new therapies and cures for Crohn's disease and ulcerative colitis. CURE for IBD was founded by parents who have dedicated themselves to finding cures for their children and everyone else living with Inflammatory Bowel Disease. CURE for IBD does not pay any participant event or travel expenses, and only funds research with the goal of finding cures sooner.

Over 1.6 million Americans (1 in 200) are affected by Inflammatory Bowel Disease, which includes Crohn's disease and ulcerative colitis, insidious and debilitating diseases in which the immune system attacks the digestive system. These are life-long chronic conditions that often result in extended hospital stays and the need for multiple surgeries over a person's lifetime. Crohn's and ulcerative colitis, along with many of the medications used to manage IBD, lead to an increased risk of cancer and other conditions. Complications can be life-threatening or fatal.

Children are the fastest-growing population being diagnosed, sometimes before the age of 1, and their symptoms are often more severe.

Get The Word Out

Looking for someone participating in an event?